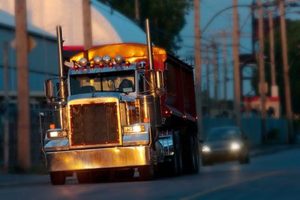 The world’s first officially recognized self-driving semi-truck was launched in May 2015. It is called the Freightliner Inspiration, a high tech version of the Daimler 18-wheeler sold all over the world. According to the company, the Freightliner will change truck driving forever by reducing long-haul semi-truck crashes, creating safer roads, and decreasing the overall cost of shipping.

The Daimler creation is an autonomous vehicle with a few limitations: The Freightliner Inspiration will operate itself only on the highway, keeping a safe distance from other vehicles and staying in its lane. It will not pass slower vehicles on its own, and when it encounters a driving scenario it is uncomfortable with, it beeps or otherwise signals the human to take over. When the driver fails to respond within approximately 5 seconds, the vehicle will gradually slow down and come to a stop.

The truck is similar in many ways to Daimler’s latest truck and passenger car releases. Lanes are detected by a stereoscopic camera, and short and long range radar scans the road for obstructions as far as 800 feet in advance. There are no rear-facing sensors needed and no vehicle to vehicle communication, or LiDAR. The software algorithms used by the Freightliner Inspiration are modified versions of the ones developed for use in Mercedes-Benz’s autonomous vehicles.

Still very much in the test stages, Daimler is confident the Freightliner is highway safe. It will be a decade or more, however, before the automaker is ready to offer the limited autonomous capability to its customers, as several million more test miles need to be logged first.

As automakers begin the shift to autonomous vehicles from traditional ones, erring to the conservative side seems to be standard protocol- never promising more than can be delivered, or more than safety regulators are willing to approve. While trucks may not be the sexy side of the automotive industry, they most certainly are the lifeblood of the American economy, and any upgrades to their safety or efficiency will be a welcomed improvement.

Nearly 4,000 people- primarily passenger car occupants- were killed in 330,000 large truck accidents during 2012. Driver error is cited as the cause for approximately 90 percent of those accidents. The head of Boston Consulting Group’s North American automotive division, Xavier Mosquet praises the value of anything that can take some heat off commercial vehicles.

Not surprisingly then, the past few years have witnessed some of the nation’s largest freight carriers outfitting their vehicles with active safety technology such as lane control and automatic braking.

It’s easy to see the safety advantages of autonomous vehicles- machines don’t get stressed, tired, angry, or distracted. By eliminating the element of human error and allowing the autonomous trucks to convoy, safety and efficiency will be infinitely increased.

If you or someone you love has been injured in a trucking accident in Denver, Colorado Springs, or anywhere in the State of Colorado, you need an experienced trucking accident lawyer on your side. Trucking companies will fight aggressively to reduce their liablities and you need an attorney on your side that understands how to fight back. Contact the experienced Colorado Springs car accident attorneys at the Green Law Firm today to schedule a no-obligation consultation and discuss your case. Call us at 1-719-694-8515.