If you or a loved one have been injured due to the actions of a hostile driver or a motorist exhibiting road rage, contact a Colorado Springs aggressive driving accident attorney at the Green Law Firm, P.C. for experienced help today.

Aggressive driving has a significant impact on traffic accidents on U.S. roadways, and is a factor in numerous deadly highway collisions every year.

General definitions of aggressive driving can include not only the way a person drives, but also any interactions with other drivers that are meant to intimidate or cause harm.

Road rage is another common term many of us are familiar with, used to describe any acts of physical or verbal violence when behind the wheel, that may be particularly aggressive or confrontational.

What is Aggressive Driving Exactly?

It is sometimes difficult to quantify what exactly is considered aggressive driving. However, according to a 2019 study from the AAA Foundation for Traffic Safety, it is so common that 80% of drivers admitted having exhibited aggressive behaviors over the last 30 days.

Additional other behaviors that are frequently associated with aggressive driving accidents and road rage, named by the AAA include:

The penalties for this type of driving behavior are often more serious than many realize. Aggressive driving repeat offenders can face a loss of their license or even serve jail time. They may also be fined or required to take anger management classes.

When an aggressive driver disregards the rules of the road and causes an accident that results in property damage, personal injury, or death, they can and should be held accountable. It’s important to contact an experienced aggressive driving accident attorney as soon as possible, in order to learn about what your legal options are.

How Common is Aggressive Driving?

Other disturbing findings from their study include:

Staying calm and being courteous when behind the wheel, lowers your risk of an unpleasant encounter with another driver or with law enforcement. To avoid conflict, adhere to the following rules of the road:

If you encounter an aggressive driver, avoid eye contact and don’t respond with aggression. If you feel threatened, drive to a public place such as a police or fire station, or call 911. And if you are confronted, remain in your car, but use your horn to get the attention of those around you. 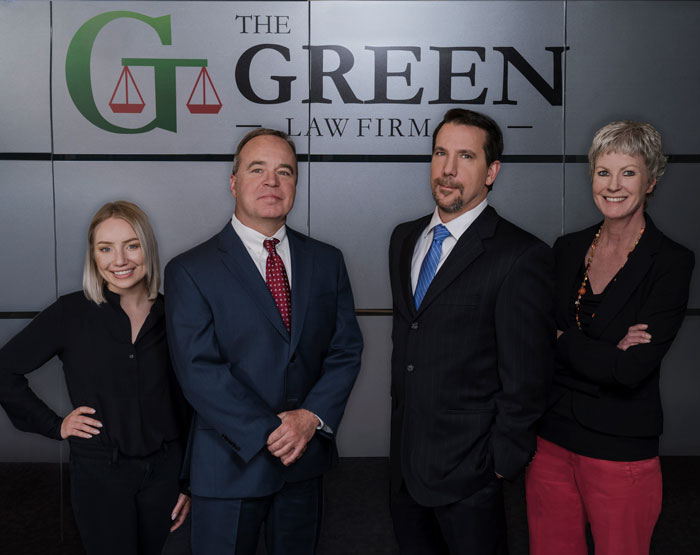 If you or someone you love is injured in a car accident caused by an aggressive driver or a driver exhibiting road rage, it is important to speak to an experienced and skilled aggressive driving accident lawyer immediately. Our attorneys have the resources and knowledge required to fight complex car accident cases – and win.

Contact the experienced Colorado Springs attorneys of the Green Law Firm, P.C. today to schedule a free, no-obligation consultation to discuss your case and learn about your legal options. Call us today at 719-694-8515 or fill out the contact form on this page to get help. We offer both in-person and remote meeting options.