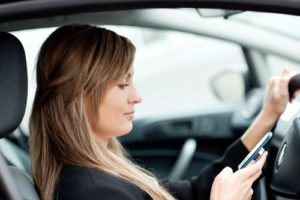 Distracted driving kills. In fact, according to the CDC,  approximately 9 people are killed and more than 1,000 injured in distracted driving crashes each and every single day in the United States. Yet, in 2017, Colorado relaxed its texting and driving laws, even as Colorado officials warned about an “epidemic of distracted driving” in the state.

The new law, SB 27, increases the penalty for a first texting and driving offense from a mere $50 to $300 and four points on your driving record. While at first glance, this seems like a law that is headed in the right direction, the law also states that drivers can only be issued a ticket if they were using their device in a “careless or imprudent manner.” Unlike previously when any form of texting and driving was illegal, now, officers must determine that you were texting in a reckless manner before issuing you a ticket.

Why Some Love the New Law

Proponents of the new law believe that if you are stuck in traffic or at a stop light, you should be able to send a text without being ticketed. After all, this is done in a safe manner and not while the vehicle is moving. They also believe that the increase in fines and the increase in points on your driving record will be a significant deterrent for most drivers.

Does it Send the Wrong Message?

Safety officials and opponents of the new law believe that Colorado is sending the wrong message to drivers. After all, many drivers believe that they are able to text safely – even when their actions are dangerous. They also believe that it will be more difficult for officers to issue citations and that the new law will open the door to legal challenges in the courtroom.

How Did This Law Get Passed?

Colorado State Senator Lois Court sponsored the bill initially to increase the fines associated with texting and driving, but Republicans in the Senate wouldn’t pass the bill as it was. To get the bill passed, Republicans (specifically Sen. Owen Hill from Colorado Springs) wanted there to be softer message about enforcement. Specifically, he stated that “If you are stuck in traffic, it shouldn’t be a crime to send a text to your spouse that you are running late.”

The law did not affect the current ban on cellphone use of any kind for drivers that are under the age of 18.

How Will the Law be Enforced?

The new law created a two-part test before a citation can be issued. The officer must first see the driver typing on the phone. Second, the officer must observe careless driving. What constitutes careless driving is subjective and up to interpretation by the officer. It usually involves at least one traffic infraction, such as speeding, not using a turn signal, or drifting into oncoming traffic. It is most commonly issued after a crash. Colorado is one of a handful of states that now makes texting while driving a secondary offense. This means that another violation is needed before an officer can issue a citation for the offense. Texting while driving is completely illegal for drivers in 46 states with the only other exceptions being Arizona, Missouri, and Montana.

If you or someone you love is injured in an accident with a distracted driver, it is important to contact an experienced Colorado Springs distracted driving accident attorney. The burden will now be increased and prosecutors will need to prove that there was careless texting and driving that directly resulted in your accident – and your injuries. Contact the experienced Colorado Springs car accident attorneys at the Green Law Firm today to schedule a no-obligation consultation and discuss your case. Call us today at 1-719-694-8515.